‘Reach for the Stars’ with the Stage Door Studio Theatre Workshop 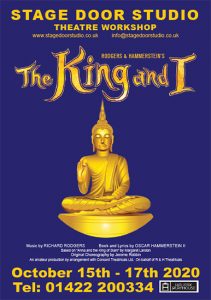 ‘The King and I’ in Halifax, so join our theatrical group of students today!

Stage Door Studio Theatre Workshop is delighted to present ‘The King and I’ From Thursday, 15th October to Saturday, 17th October 2020 at the Playhouse, Halifax.

This heart-warming, lyrical and beautiful musical made famous by Yul Brynner & Deborah Kerr, both on stage and also in the movie has won many Tony Awards.
It is the powerful story of a widow, Anna Leonowens, with inspiration taken from her memoirs who spent years living among the Siamese Royal Family. Anna who was from the UK travelled to Siam to work as an English teacher. She lived in the palace and taught King Mongkut’s wives and children, later also working as a language secretary.

The story is of Anna’s journey to Siam, from her arrival at the palace and first meeting with the King to the teaching of the children. It portrays difficulties and struggles, with Anna introducing Western ideals and culture to the household, which annoyed the King.

Sub-plots include Anna helping one of the King’s wives to conceal a forbidden love, the closeness between Anna & the main royal wife, tensions between the King and Anna, the relationships between Siam and Europe & Anna leaving the house in anger after a tragedy.

Anna is due to leave Siam & just before she does the King passes the royal title to Prince Chulalongkorn who immediately bans slavery and the need for people to bow down before royalty.

Everyone is to be treated to an award-winning musical score, great storyline and eye-catching dance performances. Please contact us via email: info@stagedoorstudio.co.uk for joining details, show & ticket information. Don’t miss out on seeing this stunning show that has something for all the family to enjoy!